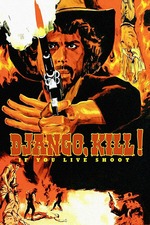 Django Kill... If You Live, Shoot!

This movie? This movie is fucking weird. It felt kind of light on action, but the violence that was there was pretty bloody, and very strange, like when a guy is getting scalped, and as the blood gushes down his face, he licks it up.

There's also a scene that weird European genre films LOVE to do, specifically to fuck with specifically me: close-ups on animals intercut with close-ups of an anguished person, to indicate the animals are torturing the person. In this case: iguanas, bats, and I think an armadillo, that were clearly just chillin' and probably not even in the same room? It reminds me of that bullshit they pulled in THE EXPENDABLES where Bruce, Sly, and Arnold were barely in the same room together, but made to look like they were hanging out in church.

But hey this movie is WAY better than the Expendables series!