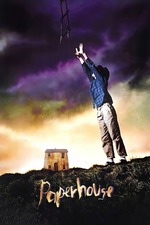 A Monster Calls without the monster, but just as much childhood trauma.

The dreamscape world of the title eerily brings to life the crudeness of kiddie drawings from the pencil of a depressed pre-teen in stark greyscale.

This is one of many visual indicators of the film's deft balance between horror and tender coming of age, which is enough to uplift child performances of fluctuating quality.

In the lead, Charlotte Burke is at once, benumbedly stiff and artlessly sincere, though she can't be faulted for mother-daughter scenes opposite New London, Connecticut native, Glenne Headly, bizarrely cast as a British mum, only to then be dubbed with an English accent. Imagine, if you will, the fraught paternal emotion of The Babadook with a mismatched voice.

That and a mostly horrible Hans Zimmer score mark down an otherwise recommendable oddity about the scariness of childhood, that would make a perfect double bill with a similarly forgotten, horror-tinged '80s flick about the grimness growing pains, Celia.