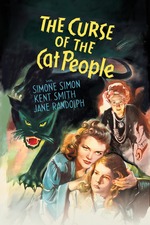 The Curse of the Cat People

Subsequently, a training film for child psychologists, this sequel about a disturbed adolescent being benignly haunted is a creepy but unthreatening ghost story, that despite bringing back some of the original faces, is so far afield from the first film's signature suspense sequences and indelible images of body horror, I wanted it to stand alone in its own universe, even as I was applauding it for being so starkly different and very much its own (non)-animal.

Retaining Out of the Past cinematographer Nicholas Musuraca means it looks every bit as good as the original, if not nearly so memorable.