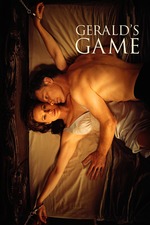 I really enjoyed this as a stand alone film, although as someone who has read the Steven King novel beforehand I do not think it did the book justice at all. However it did well in encapsulating the most terrifying scenes of the book and I almost had to cover my eyes at times.
Spoilers to both book and film ahead!!

I did love the subtle change they made at the end of the film, when Jessie finally addresses the monster of a man that taunts her when she is trapped in cuffs. Whereas in the book she merely spits on him, in the film she uses words that portray a much more emotional triumphant and powerful final scene.
I was also disappointed with the exclusion of Ruth, as she was one of my favourite additions to the original novel.