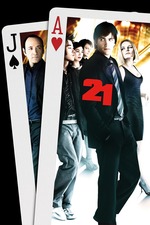 Ben, a math prodigy at MIT, is invited to a secret group that hatches an elaborate blackjack card counting scheme. It is based loosely on a true story and an adaptation of the novel, Bringing Down The House by Ben Mezrich.

Enjoyed when it stayed with the more geeky aspects of how the club recruited new members and worked the scheme, but found the old school strong arm tactics cliched. Watch a movie like Casino for that sort of drama. It's too bad that the movie started so strong, but became more and more unrealistic in an effort, I guess, to be more interesting. The most interesting parts of the film were overshadowed by fake Hollywood drama. Too bad.

Could have done without Laurence Fishburne's character. Kevin Spacey was good as the mentor of the group. Jim Sturgess as the main character was good as the geek, and not so good as the panicked teen when all goes bad. Josh Gad plays a one dimensional friend character we've seen him play several times before exactly the same way (talk about typed). Mediocre movie, not recommended.