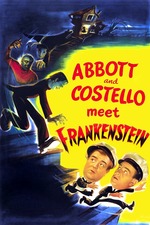 Abbott & Costello meet several famous Universal monsters, including Frankenstein. Need we say more? If you haven't yet enjoyed this famous duo of the 40s and 50s, this is a good one to start with as would be their famous stand-up routine "Who's on first?" (see that on YouTube).

What makes this film even more cooler, is they used the same iconic actors that played the Universal monsters. Dracula played by Bela Lugosi, The Wolfman is Lon Chaney Jr. Frankenstein is played by Glenn Strange and Vincent Price voices The Invisible Man (uncredited). The cast alone is worth tuning into see.

The humor is not done though foul language, it's mostly gags of Costello seeing the monster and freaking out while Abbott plays the straight, sane one who believes there are no monsters. It's a great gag that they play brilliantly. In one scene, for example, Costello keeps seeing Dracula getting out of the coffin but Abbott is always turned and doesn't see it happening.

This is the kind of comedy you can watch with the family. This is the stuff that primarily Disney is doing in 2020, but it would be cool to see Universal go back to this well again with another family-friendly comedy team. Going to be tough finding another Abbott & Costello, of course, but if Robin Williams and John Candy will still around, they would have made a good team. Recommended.