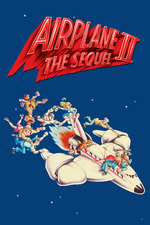 Robert Hays returns as Ted Striker in the sequel to the spoof film of the airline industry. This one has a spaceflight planned and Striker is in a mental hospital with his girlfriend moving on with a new pilot.

Despite additional star power like William Shatner, this sequel comes up significantly short of the first film. Some of the jokes are funny, but it's the basic premise that goes just too far. It's one thing to be stupid funny, but this just becomes tedious stupid stupid and rarely funny, often the best jokes are repeats from the first film. This sequel reminds me a bit of how bad the drop was from Caddyshack to its sequel. Not recommended, unfortunately.