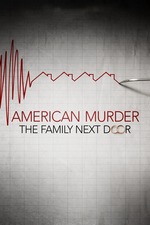 American Murder: The Family Next Door

Started watching this true story about a Colorado man, Chris who's wife, Shanann Watts and two little girls comes home one night and disappears the next day. Friends are worried and summon the police and Chris cooperates fully up to taking a polygraph test. When he fails the test, he's arrested and the horror begins.

What makes this true crime is the way it's told cinematically. You can figure out where it's all going early on -- I mean, we all know that most crimes are committed by somebody we know -- but how the story is told with real cam footage taken from the police, family and friends. Real pictures, real videos. It's a creative technique to tell this disturbing story. It feels like sitting down and watching family home movies ... only there is a dark undercurrent. Very dark.

Last year I was really excited about a true crime story called Dead Man's Line told mostly through actual video and thought that was a cool way to tell a story. This takes parts of that, but doesn't have quite the suspense factor. We want to know what happened to the family, but when we find out, it's not quite as shocking as it should be.

It's the techniques in telling the story that I enjoyed most. You'll see text messages being typed seemingly in real time complete with mistakes, which just adds to the realism. The movie is recreating these actual messages, but it's a very effective camera trick and makes this story better.

My wife and I are fans of the true crime genre and this is a very solid film, even though I knew nothing about the case and have to take away a star for us both figuring out too soon in the story what happened, it doesn't make it any less horrific, however. What a riveting way to ell this terrible, truly disturbing story. Recommended.