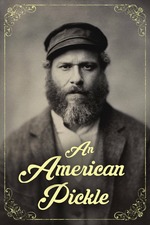 Herschel Greenbaum (Seth Rogen), ditch digger who works as a pickler in 1919. He falls into a bin and is perfectly preserved for 100 years, frozen in time, to meet a future relative that is a frustrated internet app developer, also played by Rogen. The future Rogen at first is helpful, but quickly turns on the time traveler, trying to sabotage his attempts to become a successful business owner in the present time.

The story starts too slow, but becomes very funny as the future Greenbaum repeatedly sabotages the 1919 Greenbaum's horrific, yet funny, pickling business exploits. Also, the 1919 Greenbaum is refreshingly candid and yet shockingly inappropriate making for some genuinely funny and tense conflicts. The script is well written and acting by Rogen as both Greenbaums is spot on. The trial section made me laugh. I loved the ending, causing me to give it an extra half star.

The Fast and the Furious