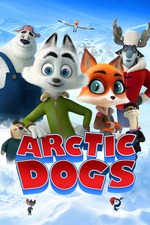 Swifty is a young arctic fox who dreams of being a "top dog" -- a high honor to be able to pull the sled and deliver packages. No fox has ever been able to do that. Swifty trains and gets the opportunity to run his first sleigh and runs into the diabolical Otto Von Octopus, who is up to no good.

Shouldn't this be called Arctic Fox(?) since the main character isn't even a dog and the "Dogs" referenced in the title are bit players in the overall film.

The animation isn't as crisp and bright as expected for a snowy backdrop. The voice acting is good, but other than Swifty and Otto, there aren't too many deeper explored characters. Swifty has his eye on Jade, but she is mostly a tinkerer with very little depth.

This is a marginally enjoyable animated film. We took our grandchildren and they were more interested in the preview for Trolls World Tour than this movie. Not recommended.

Tales from the Hood 2