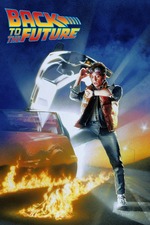 A Delorean as a time machine vehicle, Eddie Van Halen's guitar playing seeming like something and alien would use to melt brains, a zany mad scientist named Doctor Emmett Brown (Christopher Lloyd), and a guitar-playing teenager (Michael J. Fox) who travels back in time to help his father (Crispin Glover) get together with his mother (Lea Thompson). Oh, and did we mention his mother has the hots for him?

This movie is one of those you can't possibly get tired of rewatching. I like to rewatch near/around/during the holiday season because it's a feel good, family fun story. It's part of three movies in the franchise with the first being 1955, the second being the future, and the third being the 1800s, but this one was a major hit and for good reason. Great writing, catchy scenes, acting is top notch. Highly recommended.