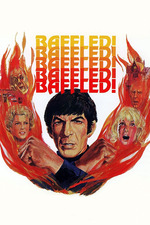 WTF is going on in this movie? The title describes my emotion after watching.

This movie is so bad it's laughable (somebody get the Rifftrax folks all over this one). Spock, er, Leonard Nimoy without the pointed ears top billing as a race car driver (!what?!) who has visions of people dying while just, well, driving his race car.

Every scene in cars featuring actors, even for 1973 are so awful that you wonder what sound stage this was filmed at? The dialogue is stilted and delivered with such lack of any real emotion that you are left wondering if everybody making this movie was stoned out of their minds.

"Shall we all have a happy and hopeful cup of tea?"
"Perhaps we have met before, but if we haven't, I'm happy to meet you."

Yeah, this dialogue is wrecked.

It's not like Leonard Nimoy smiles much, but he looks downright constipated throughout most of what I could watch in this film.

After some digging around on the internet I learned that this was a failed TV pilot. Would like to have been a fly on the wall when this was pitched to the network.

Even the artwork for the movie is trash. This crap is thoroughly unwatchable. My first half star review on this site and that's a gift. Avoid watching this streaming vomit.