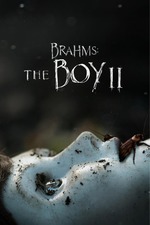 A little boy named Jude is traumatized when a stranger enters his house and attacks his mother. Jude stops talking and his mother and father decide to move out of the city. In the woods, Jude unearths a doll that he says talks to him called Brahms. From there, Brahms becomes the focus of evil childhood friend.

Video Review - just left the theater (no spoilers) -- sidenote: this video contains a Brahms moment when the camera just flips over and has a weird zoom effect. It's got to be the ghost of Brahms fault!

Dolls are creepy let's get that out of the way. I've always found horror films with dolls in them to be at least a little uneasy to watch. So, this movie gets a boost from just the presence of the doll. Brahms is an odd name too.

The problems with this movie are we've seen the story before. It's an old tale with a young boy who finds a friend that only he speaks to and bad things happen. We can't really tell, at least initially if it's the boy doing the evil deeds or the friend. So cliches aside, this story brings almost nothing new.

The pacing is a little off too. Very slow moving in parts with unnecessary jump-scares at awkward beats. It's like a song where the drummer plays the beat out of time. The ending is terrible. Won't spoil it here, but if you don't stick the ending in a film, the rest is severely impacted.

The sound is the most effective part of this movie. The writing, directing and editing are just OK, nothing really stands out. The atmosphere and setting are there for this film, but it all comes together messy. There have been worse new horror movies to see in 2020. Not recommended.