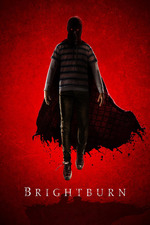 A baby crash lands to parents in an egg-like space vessel. Instead of turning in the incident, the Brier parents played by Elizabeth Banks as Tori and David Denman as Kyle decide to raise the baby. All is well until Brandon gets older and starts to develop his true powers. He's not a superhero, however.

This story seems like a heavily inspired horror version of Superman with pieces of the spaceship as the kryptonite and no Lex Lutho. Some really gory scenes and a plot which starts out charming and sweet and turns sinister. The biggest drawback for this film is the lack of a major antagonist. Instead we get weak humans and that doesn't seem quite enough power. I was entertained, but finished this thinking there needed to be more, like it made me hungry but didn't fill me up. Recommended, barely.