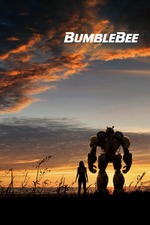 The yellow Transformer affectionately known as Bumblebee is sent to earth, broken and speech synthesis removed from a vicious attack by the Decepticons, only to be repaired as a first car by a teenage girl, Charlie (Hailee Steinfeld). Soon, she realizes Bumblebee is much more than a car, befriending the quirky robocar.

This is Transformers spinoff with a focus more on heart than epic action battles and frenzied sequences that director Michael Bay made popular.

Just a side complaint: how does the car seats look so pristine after conversion from the robot? It doesn't look like the car can fit in the robot and vice versa. I kept thinking that every time the transformation took place.

Directed competently, but not with much flair or experimentation, by Travis Knight. The story comes off more Hallmarkish than blockbuster, but has a good soundtrack, decent acting and is an OK film. Not super entertaining, but not boring either. Still, not recommended.