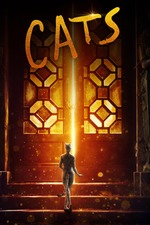 A bunch of singing, dancing cats on their ascension to the next life played out in front of a building. That's the story. It's impossible not to spoil this movie because if you've seen the trailer, it's already spoiled. You don't even need a two minute trailer to tell this story.

It's based on a play which is based on a poem and the music is everything. If you have zero interest in musicals and even if you like musicals, it's doubtful you'll like this mess. If you like special effects and weird stories? Again, you'll be disappointed because the CGI is ghastly and there is no story.

It's like one continuous marathon of singing from weird human-cat creature after another. Yeah, there are actors and actresses under there but after about the third of twenty songs you don't care.

Almost no dialogue. The song ends and guess what? Another average at best song is sang. This might work as a play, in fact I think it's had success in that area, but it never, ever should have been made into a film. Save yourself from this kitty litter. Worst new movie I've seen in 2019 and hard to imagine there could be any worse in the next week or so before the year is gone. Avoid.