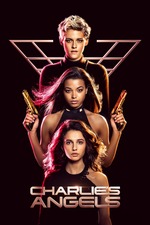 The plot for this second reboot involves a new revolutionary power source that is activated through Rubik's cube like devices, but there is a flaw that "in the wrong hands" could turn these into weapons.

In comes a retiring and very ancient Bosley / Xavier / Captain Picard / Patrick Stewart. There was a part at the beginning where Joel and I both remarked we were reminded of X-Men. Seriously, a bunch of Bosleys, bunch of angels in a bunch of offices all over at a retirement party.

None of the Angels are even half as attractive as the original Angels or the McG Angels (Drew Barrymore, Lucy Liu, Cameron Diaz). We couldn't understand why was Elizabeth Banks as Bosley always in different costumes? She wasn't undercover every single time she was on screen and yet she constantly was dressed and makeup differently. Her Bosley was a hot mess weaving in and out of the story, hogging screen time from us being able to get to know the new angels.

The new angels were basically the definition of nondescript. Not very well fleshed out or interesting. There is an angel that reminds of Mackenzie Davis from Terminator (same short hair), another angel who is supposed to be the tech geek and another one named Sabina. Really? Sabrina was the original name of an angel, so we just drop the "r"? Like that isn't going to be confusing.

I don't know what the $50 million was spent on for this movie? The vanilla action sequences maybe(?) Just skip this and watch the original TV series which is vastly better than both reboots, but McG did way better rebooting this than Banks.