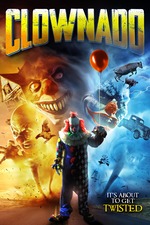 A clown and tornado mashup with some godawful acting, but decent gore effects. Written and directed by Todd Sheets. The plot is mostly incoherent but, hey, it has clowns and tornados! Perhaps trying to riff off the whole Sharknado train, I think that movie is far superior.

If you can get past the jumpy, jittery camerawork and horrifically bad acting, there is some fun here. Especially the woman-monster with breasts having mouths with big hungry teeth where the nipples belong, and a hip, black Elvis impersonator.

These clowns are not quite as much horror fun as Killer Klowns From Outer Space but this isn't as bad as it might sound. Will it spawn sequels or a franchise? Probably not, but it's almost good enough to recommend to horror-comedy fans.

I Want to Marry Ryan Banks