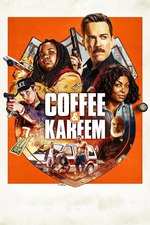 Netflix is so all over the board with their original movies. They can do something like The Irishman and then this offbeat, screwball, cliched but funny comedy.

A policeman named Coffee (Ed Helms) tries to bond with his girlfriend's 12 year old son Kareem by picking him up at school and they end up witnessing a police officer being executed by other dirty cops. Coffee is framed for the murder and labeled a "psycho cop." Betty Gilpin plays one of the main dirty cops, and like her more physical role in The Hunt she mixes it up a little here, too.

Coffee is white, Kareem and his mom are black. There's a lot of racial humor, but this also is a fun story on acceptance of an interracial relationship.

The tough mom played by Taraji P. Henson has some hilarious parts. I thought this movie would be stupid funny, but it's legitimately funny in some spots. The plot is cliched, thanks to a screenplay that doesn't take many chances (drugs and dirty cops? Yeah, we've seen that how many times before?), but the comedy is not as cheesy as I expected. Had an unexpected good time with this Netflix Original. A very slight recommendation here. More like 2.75 stars, but rounding up.