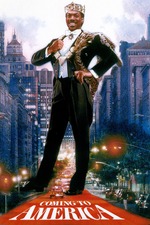 Eddie Murphy plays a prince from a foreign land who visits America with his friends Simi (Arsenio Hall) to find his queen, rather than go the traditional route of arranged marriage.

This is one of those Eddie Murphy comedies that's endlessly rewatchable. He plays several different characters as well as Arsenio Hall. They do this barber shop routine that alone is worth the price of watching. Murphy would go on from here to do the whole multiple characters in the same movie, a la Jerry Lewis, in several other films (IE. The Nutty Professor).

The whole Soul Glo substory. Randy Watson's band Sexual Chocolate, the basekeball game, Cleo McDowell in clone war with McDonald's, the list of humorous scenes and setups are golden. My only criticism, and it's a very slight one, is the scenes in Zamunda are not as funny as everything that happens in America. Recommended.