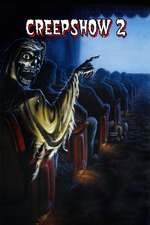 Follows the same format as the first one, except only three stories instead of five, no George Romero directing and only one of the Stephen King stories is great (King doesn't write the screenplay either, like he did in the first one), the other two stories are just so-so. This is an anthology movie based on three King short stories. My favorite is "The Raft" from King's short story collection, Skeleton Crew.

The other two stories are "Old Chief Woodn'head" and "The Hitchiker" with the former about an indian totem that goes all Death Wish and the latter a bad rip-off of an old Twilight Zone episode with exactly the same name (only much gorier).

But it's worth the price of admission for "The Raft" which has four teens going out to a lake and swimming out to a raft only to find some black oil slick-like creature waiting to eat them. This short story was fantastic and the adaption here is excellent.

If not for "The Raft" this would be a one star affair. I'll bump it to two stars otherwise. The original Creepshow isn't crazy good, but it easily better than this. Not recommended unless you are a diehard Stephen King and must see every adaptation of his awesome fiction.