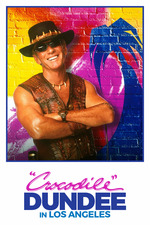 This movie is a perfect case of sequel fatigue, where the same idea was cool in the original movie, but has worn out its welcome. A fish out of water story in Mick Dundee (Paul Hogan) a man who can wrestle crocodiles coming to America. We saw that already and this time his girlfriend, news reporter Sue Charlton (Linda Kozlowski, Hogan's real life wife), is called back to America for fill in reporting and Mick comes along with their son and they get embroiled in solving a crime.

Just doesn't have the luster of the first or even the second. The romantic chemistry between Mick and Sue isn't even as strong here. Maybe it's because in the first one there was real chemistry, off screen that transferred on screen, and by this time they've been married for years and don't have the courting spark. Not recommended.