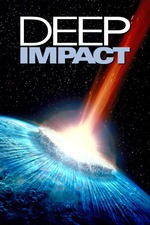 Tea Leoni stars as Jenny Lerner, a young MSNBC reporter, who thinks she's stumbling onto a political scandal steps into an ELE (Extinction Level Event) involving a 7-mile wide comet on a collision path with earth. Robert Duvall plays NASA pilot Sturgeon Tanner, piloting a crew on the Messiah sent to hopefully divert the path of the asteroid. A very young Leelee Sobieski in a supporting role as the girlfriend of a young astronomer Leo Biederman (Elijah Wood) who was the first to spot the giant asteroid.

One of my personal fears for earth is the subject matter for this film. It killed the dinosaurs, and someday it could kill most (maybe all) of mankind. The movie handles the tragedy from one year until impact almost like a running news story but with some very human stories involved. How the people of earth might treat a tragic event, what could be done and whether or not it is a success. It's almost a sci-fi type thriller, but it doesn't get too deep in the science. A gripping drama that delivers, particularly the last 20 minutes. Recommended.