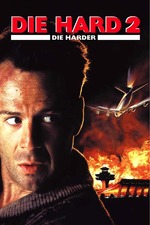 John McClane (Bruce Willis) is back, and this time instead of running around from bad guys in a tower, he's chasing bad guys at the airport with Holly (Bonnie Bedelia) circling in the air above and running out of gas. Most of the characters that survived in the first film return, including the cop who loves eating Twinkies.

Bruce Willis acting in the first Diehard didn't seem as forced an unnatural as in this one. It was entertaining and I enjoyed watching this. It even has good replay value, but it's barely in the same league as the first one. I mean, how do you top Hans Gruber as a villain? An airport doesn't have the same claustrophobic and dangerous feel as one of the top floors in a tall building. If you can do what I'm not doing in this review and enjoy this sequel for its strong effort to return to the glory of its predecessor, this is a decent action flick. Recommended.