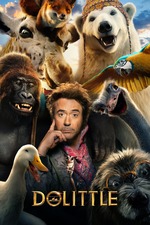 Dr. Doolittle (Robert Downey Jr.), the man with the amazing ability to speak with animals has gone into Last Jedi Luke Skywalker recluse mode after his beloved Lily while on a grand adventure died at sea.

Seven years later a teenage boy accidentally shoots a squirrel near the Doolittle sanctuary and takes the injured animal to the good doctor for help saving the animal. Elsewhere in the kingdom the Queen is dying and a woman embarks to meet Doolittle and encourage him to visit and engage on an adventure to save the Queen.

1. It's very CGI-inspired and looks that way. Maybe I'm a purist, but would rather have seen more live animal action than fake animal CGI action. I know the VFX are a great part of what makes movies like this, but for me, infusing as much real animal work -- when safe of course, to avoid drawing the ire of PETA -- would make this kind of movie more authentic.
2. The villains are very cardboard and cliched. This lack of creative antagonists makes the film more about Dr. Doolittle's internal conflict (again, Luke Skywalker) instead of any serious, threatening opposition in the story. I would have liked more creative effort here. The tiger on the island was a nice touch, but the tiger doesn't join the crew or have any other real impact other than be a temporary aversion in the adventure.
3. To carry on that front, it's a very obvious adventure with predictable conflicts. We know that Doolittle and his crew of animals aren't in any serious danger, which , again, weakens the dramatic impact of the story.
4. Except for Iron Man Downey, the rest of the acting is fairly pedestrian. Lines are delivered without much passion. The actor who plays Doolittle's apprentice, Stubbins (Harry Collett) is particularly bland. Nobody else really stuck out for me with their performances. It was like, yeah, we're working on Doolittle, here. Just not much passion.

1. The sound and music are both good and fit the film.
2. Cinematography is competent and non-distracting. There could have been more creative given the material, but everything is in focus and not show in a way that is distracting.
3. Robert Downey, Jr. is good. His accent is at least somewhat inspired by the character in Tropic Thunder but he helps make more out of weaker story material. Is he worth $20+ million (the number I heard he was paid for this film)? With a lesser actor and the same material, I probably take away at least a half star. Downey makes this film more interesting, so, yeah, he's worth the pay.

At the end of the day, I'm recommending this film. It's not as bad as some critics are saying, but it's not some amazing adventure film either. Just sort of middle of the road and largely forgettable. It seemed a little too obvious that they wanted to make this a franchise film opening it up to future adventures, but doubtful that will happen on the big screen. Maybe one of the streaming services picks it up as a TV series with a smaller budget. Sort of like Doolittle helps a new animal in peril each week?

Anyway, see it if you like talking animal movies. If you aren't an animal fan, this is probably one to wait until it shows up on the rental/streaming circuit in a few months. See it quickly in the theater if you want to see it there as I'm guessing it won't be sticking around long.