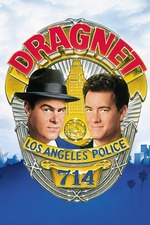 Been awhile since I've watched this one, but think that Dan Akroyd nails the Joe Friday character. Tom Hanks as his partner was a bit wacky and weird and think I would have appreciated this movie more if it had tried to keep it more serious. Then again, not sure Akroyd would have been cast for that type of Joe Friday.

The story involves a strange Pagan ritual ring that Friday and his partner need to take down. There is a Playboy-style antagonist in the mix and a bunch of pretty women as eye candy. None of this, again, matches what the original Dragnet TV show was about or like. Was it trying to poke fun at the seriousness? Of course.

Just didn't work as well as it could have. It's not a terrible film, but I can't recommend it to fans of the original series. Seems almost a bit disrespectful at times. The original TV series was entertaining and this is too, if you can get past that it's not deserving the namesake.