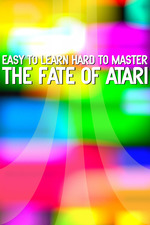 Easy to Learn, Hard to Master: The Fate…

Documentary that covers the rise and fall of Atari, the first successful coin-up arcade and videogame (the Atari 2600) company. A lot of interviews with key programmers and the man who founded the company, Nolan Bushnell, as well as his successor, Ray Kassar.

Bushnell comes off somewhat regretful, having sold out too soon and saying if he had stayed at the company it wouldn't have gone down the way it did. We'll never know.

Ray Kassar interviewed just looks clueless most of the time about key past events of Atari, saying repeatedly, "I don't remember." Maybe he was too old at the time of this interview and didn't remember, but it seems more than convenient.

Overall, an interesting documentary because of the interviews of real people at the time telling the story. The way it's all put together seems off somehow and not as professional as the source material deserved. Production values get 1-2 stars, while the interviews are 4-5 stars, leaving this just a three star doc for those interested in classic gaming. I'm not sure non-gamers will like this very much, though. so it's recommended with a big asterisk.