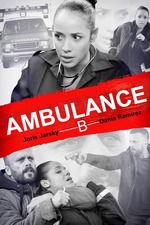 A robbery gone wrong leads to a man being shot. His brother then forces a paramedic team at gunpoint to help his brother. The female paramedic, Camilia (Dania Ramirez) must then perform delicate surgical procedures to remove the bullet.

There is a bunch of driving the ambulance around, trying to make dispatch realize there's nothing wrong when clearly the opposite is true.

The idea is alright if only I could get past the plot not being very credible. The acting is OK, particularly Ramirez' portrayal as the doctor-paramedic under protest character, but I just kept thinking over and over that it was too far-fetched.

The best parts of the movie for me - no spoiler - were from the brother going from cold-hearted robber to compassionate brother. That rang some bit of emotion from me. Enough to warrant this two stars.