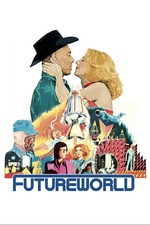 It is a shame that it took until HBO came out with a Westworld series to get a decent sequel to a great movie. Futureworld skips the formula set out in the first film. about a robot amusement park gone bad with movie using robots for a sinister plan. A reporter (Peter Fonda) is investigating if the newly reopened park is on the up and up.

Yul Bryner returns as The Gunslinger robot, but he is less menancing here. This movie just never really feels right. Like every actor, every scene is somehow marching to an uncertain agenda. It's too bad the screenplay isn't better, because I wanted to like this. I have watched it several times hoping it would be more like the movie that preceded it. Should have known that the great Michael Crichton who wrote Westworld wanted nothing to do with this. Not recommended except for those who enjoy mediocre robot movies.