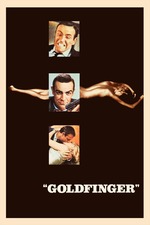 Sean Connery as James Bond 007, the one who set the mold for Ian Fleming's suave, smooth agent. For me, this is the pinnacle movie based on an Ian Fleming novel complete with the catch opening montage song by Shirley Bassey "Goldfinger!" Not too long, like some of them are, has a great villain in Auric Goldfinger (Gert Frobe), a deadly hat throwing henchman named Oddjob (Harold Sakata) and perhaps one of the most awesome female character's name in any spy movie ever, Pussy Galore (Honor Blackman).

James Bond movies don't get any better than this. Q is there to dole out some tech gadgetry. M and Moneypenny get Bond dialed into the mission and there is a diabolical plot which isn't too ludicrous. This is the golden template for 007 movies and if you're starting with James Bond movies, this should be one of the first to watch in the long and storied franchise. Highly recommended.