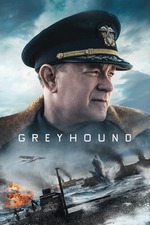 Tom Hanks captains a ship during WWII. Think times along the lines of the movie Midway. One brief flashback on land when Hanks' character asks his girlfriend to marry him and she rejects his offer and gives him a pair of slippers as a present. Then it's onto commanding the Greyhound which protects a fleet of ships in the blackout zone -- an area where there is no air cover. It's taut military boat combat action with German U-boats encroaching and attacking. One U-boat known as the Grey Wolf taunts the Greyhound relentlessly, promising they all will die, forcing them to change radio channels. Will they make it through the zone or be sunk?

Nearly all of this movie is white knuckle entertainment. Viewers are made to feel like they're aboard the Greyhound in the middle of attack standing witness to the captain (Hanks) every decision which could lead his crew to death or success. As they near escaping the unprotected zone they are low on depth charges and ammo.

Hanks is as usual excellent and makes us believe he is the captain of the ship. He plays his insecurities close to his vest with the crew, but not the audience, showing just the amount of fragility. His performance is nothing short of a highly skilled actor. I found this to be better than Midway on the shoulders of Hanks, with the riveting combat sequences and terse Battle of the Atlantic portrayal. Over 72,000 lives were lost in WWII, a reminder to never forget the true cost of war. Title credits offer real naval black and white footage. Recommended.