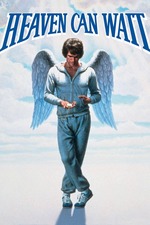 Fantasy-comedy with Warren Beatty playing a second string NFL quarterback who is about to get his big break starting when he is unexpectedly killed. The angel sent to watch over him pulls him out of the event before the outcome is determined and he wouldn't actually have died in the accident. So, he is given the option to accept a new body, which is a rich guy with all sorts of his own problems.

I have fond movies of seeing this in an old two screen Liberty Theater (still in existence today) in the late 70s in Camas, Washington, the same theater I saw the first run of Star Wars. Enjoyed this movie the first time I saw it, because even back then, it has an old school comedy feel to it. If you like movies that explore the afterlife in a humorous and non-religious/spiritual way, plus have a sports tie-in, this is a must watch.

This film is a remake of a play called Here Comes Mr. Jordan (1941) which I haven't seen and there was a third adaptation called Down to Earth in 2001 starring Chis Rock. That is probably the best known one and that wasn't nearly as entertaining, well written or acted as this one. As of this review writing (10/5/2019) it is currently streaming on STARZ, so see it while you can. Highly recommended.