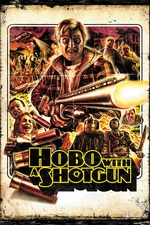 Rutger Hauer plays the Hobo who spends his days collecting cans and trying to beg and scrounge up money. He visits a town tormented by a sadistic family of bullies that delight in torturing residents, particularly preying upon the indigent and homeless.

There are some seriously messed up scenes in this film. Some a seasoned horror fan like me hasn't ever seen anywhere before, so that warped creativity earns an extra half star in the rating.

The Hobo makes a citizen arrest, trying to prevent a woman from being raped by one of the punks and takes him to the police. Unfortunately, the police are turning a blind eye to crime, and dumping him in the garbage. A prostitute named Abbey befriends the Hobo and takes care of him. It doesn't take long for The Hobo to snap and go into full on hardcore vengeance mode -- and that's when the fun really begins.

This movie makes Death Wish look like a country picnic. It's pure black comedy with some vicious blood and gore scenes. The villainous scum are led by a guy named Drake, and the Hobo is about to make Drake and his minions suffer.

If being completely honest, this movie isn't that great, but what makes it good is that it knows its place and is like a dentist drilling on a nerve, over the top and in some places horrific and funny at the same time. It's difficult to work timing out on movies like this, they either hit it or miss. Here, it mostly works.

There isn't much characterization, plot or purpose. The bad guys are overly bad and the Hobo, while a little bit fleshed out as a vigilante is for the most part a one man wrecking crew. The Hitcher is probably my most favorite Rutger Hauer role, but this is in my top five of his movies. Rutger Hauer died in July 2019, so we'll have to celebrate the work he left behind. Here he just no nonsense tears it up. If you like gory, crime-soaked revenge horror-humor films, this one is a must watch. Recommended.