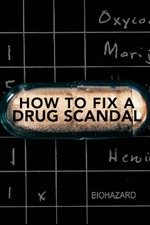 How to Fix a Drug Scandal

Sonja Farak, a Massachusetts lab chemist, becomes addicted to the drugs she's testing and certifying. She falsified thousands of results which brought into question convictions on hundreds of cases.

Apparently no drug testing was required for these chemists, either as a condition of employment or random tests while they worked. Farak went to work and got high at work on the chemicals she was tested for almost 10 years.

Also covers a similar case of lab chemist Annie Dookhan. Between Farak and Dookhan tens of thousands of cases were in dispute from tampered evidence.

This 4-part docu-series as it's billed is like an extended episode of CSI. The sounds are expertly placed, the narration is excellent and the recreations are very well done. This made me angry at the prosecution office for how this was all handled but grateful that the defense attorneys pushed through for justice. While the source material could have been presented dry and boring, that's the not the case here.

It did drag on a bit, so taking away a little here and there. This is the danger of giving someone a series to tell a true story. I've noticed this in some of the other Netflix documentaries. They could have gotten from A to Z faster and tighter, but it was entertaining enough to hold my interest and in parts invoke some emotions. Recommended.