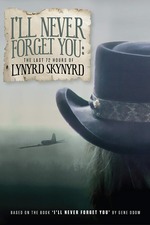 Security guard, Gene Odom, lead backup singer, Leslie Hawkins and guitar tech Craig Reed tell their stories of what they did in/for the band and being survivors aboard the Skynyrd plane crash October 20, 1977. Based on the book by Odom, same name.

Reed, the guitar tech, admits that he doesn't even play guitar and somewhat amazed that he ever got the gig. He was a friend of Van Zant and went onto the guitar tech for Foreigner (Double Vision tour) and other bands.

Hawkins admits she was never quite the same following the crash. She did a couple "big tours" with Molly Hatchet, but never felt well enough after the crash to going back to regular work.

The most fascinating part of this documentary is with the first responders describing what they saw interspersed with the three survivors. Viewers really get the sense of the crash devastation and terror inflicted on those involved. Also learned that the pilots were decapitated. Gruesome stuff.

If you want to hear first hand accounts of what it was like, this is an OK interview-style documentary. A little slow in parts, but worth watching. I wouldn't recommend this except to fans of Skynyrd, as there are more stories we could have heard about the band other than the crash, but we don't get much of those. Not recommended.