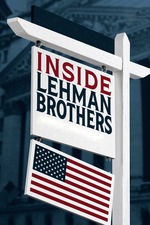 Covers how Lehman Brothers went into bankruptcy over fraudulent loan practices including outrageous stories about low level mortgage underwriters who tried to call out scams and were targeted, harassed and shamed instead of rewarded and applauded for uncovering unethical business practices.

Found myself getting angry (again all over) at Wall Street scams like this, frustrated that the people that led this company were not brought to justice. While the company went into bankruptcy many people and business defaulted and jobs were lost, and yet high level executives got to keep their millions.

The documentary suggests toward the ending that some of these practices may still be happening in 2020 or have started up again in the industry, not necessarily the same company(?). Subprime lending has increased again. Hopefully, there is better oversight. Recommended for those who want to learn more about what happened in 2008.

I can't give it more than three stars because the story was fairly complex and went all over the place, including companies that were owned by Lehman Brothers. It was a many-headed hydra, so telling the story in a short documentary format is more challenging than it sounds. Still, it was definitely entertaining.