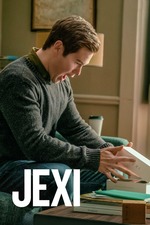 An artificial intelligence female operating system (OS) in a new phone that calls itself, JEXI, takes over the life of a online writer played by Adam Devine. JEXI is pure attitude and, dare I say, mean funny. There were several other older couples like us (we're 50+) in the theater and a fair amount of laughter permeated the theater.

Critics are saying this movie is terrible and I'll agree it's not the best romcom (I'd rather watch the chemistry of Hanks/Ryan in You've Got Mail, but it is a fun enough Saturday date night movie, at least for our demographic. It seems to want to pander to a younger generation -- Michael Pena (looks a lot like Mark Ruffalo) -- is a hoot as the cranky boss -- but oddly enough I think it isn't likable enough, nor cool enough for the target generation. My wife and I were entertained and for us that's good enough. Sure, it's not for everybody and I'm sure there will continue to be plenty of shade thrown its way, but we'll recommend for date night.