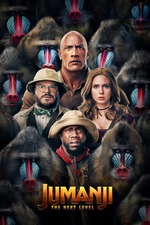 Why does Spencer, fully knowing the dangers, go back into Jumanji? This becomes the springboard to reassemble the team inside the game.

We watched this tonight in ScreenX and somewhat comically they had the side screens showing Ford v Ferrari. We told the manager and he did the right thing, fixed it and then gave us two free tickets for any format. A bit distracting to the start of the movie, but the plot is simple, so stayed easy to follow.

This film suffers from being the third film in a franchise that's past the expiration date. There is very little to nothing that is fresh or new over the last film. The Rock with Danny Devito is an odd mashup but makes me laugh. Same for Kevin Hart. I didn't care much for this movie, it just left me feeling too much been there, done that already. As the film went on, I became increasingly less interested whether or not they'd "win" the game. This franchise needs to be done if it can't be more original than this. Not recommended.