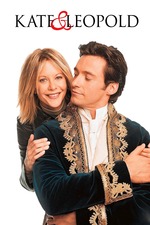 Kate (Meg Ryan) encounters Leopold (Hugh Jackman) who enters through a time machine in a ripple by joining off a bridge. Yes, you read that correctly: a man travels to the future by jumping off a bridge into a rip in space and time following a crazy inventor type (who doesn't seem even remotely credible).

It's the old fish out of water story, wrapped in a rom com package for Meg Ryan. This is 2001, and certainly no Sleepless in Seattle. Ryan and Jackman don't have the necessary chemistry that Hanks and her had in multiple good films and the whole time traveling substory is one of the flimsiest. Still, there are some OK moments.

Directed by James Mangold. This made $78 million against a $48 million budget at the box office. It's largely forgettable except that it's one of the last semi-decent rom-coms Meg Ryan starred in. After this movie she seems to pop up more in tabloids for her alleged plastic surgery nightmares than being in entertaining movies. It's all too bad, because she played the girl next door every woman character verywell in past films. Just not very much of that magic displayed here. Not recommended.