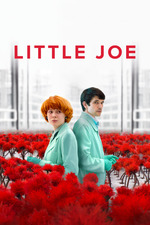 A boy befriends a plant he calls Little Joe brought home by his mother. The plant releases something mind altering.

Saw this unusual film on a plane fight and kept thinking, these plants are going to cause mayhem, but instead they are just creepy for being there. I have to call out the loud piercing sound that is repeatedly used when we see all the plants in a room. I can see using this one time in a movie for effect, but beyond that, it's just annoying and stupid. I had to turn down the volume very low to prevent hearing damage.

The movie is weird, plain and simple. I'll give it some credit for not being what is expected, but it's not very entertaining at the end of the day. When the credits rolled, I felt like, "is this it?" Maybe it would have been cliched if the plants caused murderous rampages and other violent acts, but that would have been more interesting than what they do in this film. Not recomended