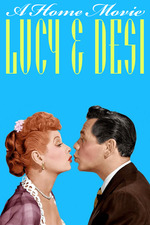 Lucy and Desi: A Home Movie

Lucille Ball and Desi Arnaz are one of the greatest and most tragic love stories lived on camera. We got to know them as the fictional Ricardo couple in the 50s (well, most of us now reading, through syndication).

This show was arguably the greatest TV comedy of all time. Some of the scenes are almost impossible to watch without laughing. Go look up the tango scene between Lucy and Desi where she has eggs in her dress. The look on her face is priceless comedy. The laughs received were among the longest in the history of television.

So, who better than one of their children, to produce a documentary on the couple. Lucie Arnaz skillfully weaves the behind the scenes story of Lucy & Desi. There is a sadness that this famous couple we loved couldn't stay together. The marriage was ruined by Desi's womanizing but even after their divorce, they still loved each other literally until their deaths.

This is a fantastic documentary that contains plenty of home movies and times when the couple played with their children. laughed and smiled but has a very sad and real ending that neither were ever the same after their divorce. This is how to do a documentary on famous people, by the people inside who know and care the most. Highly recommended.