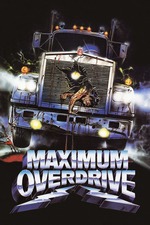 Starts with Stephen King going up to an ATM and having it call him an "asshole"? You'd think this movie about machines going crazy and turning against mankind based on the short story "Trucks" from Night Shift, written and directed by King himself and containing a soundtrack by AC DC would be the best horror film ever?

I think it was a bit too cocaine-fueled 80s energy because some of the visuals are fun, but the movie sucks. The biggest issue is that the short story (which is good) just didn't have enough meat to cover the bones of a full-length feature film.

I rewatched after all these years thinking maybe I'd find some redeeming qualities (or believe it wasn't as bad as my memory of seeing it long ago), and there are some brief glimmers of excitement (the soda machine on the baseball field for example), but overall, it's just a creative mess. King has never directed anything since. I'd like to see him give it another try, this time not on drugs and perhaps using something that would translate better to a full movie. Not recommended except for the most diehard Stephen King fans on the planet, and even then, he should not be blamed him for one turd among so many gems.