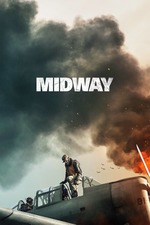 December 7, 1941 this movie starts at Pearl Harbor on that fateful day and how it impacts the United States Navy.

This is mainly about the at sea battle in/around midway between the American and Japanese naval fleets and fighting pilots. The movie has some slow parts, but starts out at a good place and the battle scenes are tense and thrilling to watch. I did get a bit depressed watching this movie thinking how many brave souls lost their lives -- both American and Japanese -- in this war.

Entertaining, but I think Pearl Harbor was more engaging in that it focused on not as many characters and there was a also a nice romance to offset the war in that movie whereas this one was pretty much all about the conflict and war with minimal characterization beyond the fighting. Recommended.