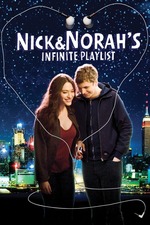 Nick is obsessed with Tris who broke up with him, sending her mix tapes she can't be bothered to listen to. Norah meets Nick at a club and pretends to be his girlfriend to make Tris jealous. Meanwhile, Caroline who is friends with Norah gets drunk and needs to be taken home safely. Thus begins a night filled with losing Caroline, finding Caroline, running into Tris and Nick and Norah's adventure together for one night.

As evidenced by the paragraph above, the story is a bit convoluted, with multiple mcguffins employed. The motivations for the characters are weak, even if we accept they are being free spirits and partying. There is medium warm chemistry between Nick (Michael Cera) and Norah (Kat Dennings). Tris is a bit too one-dimensional in that she doesn't really care for Nick only when he makes her jealous. If you're looking for a better one night of fun coming of age type comedy, try Superbad which also stars Cera.

This doesn't really work as a comedy (not funny enough), nor as a romance (a bit too obvious). Add this up and it's just ... OK. Streamable maybe, but overall not recommended.