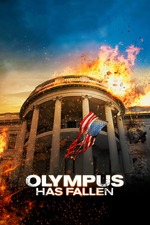 A North Korean assault on the White House with Mike Banning (Gerard Butler) playing the John McClane type Diehard character. One man against an armed assault force that has taken the White House.

The story has some "WTF" moments in it, but the acting tries to rise above the implausible moments. I like how the President and secret agent Bannon are good friends, which adds a human spin to the story and drives Bannon's mission to save the President and his friend more intriguing. Morgan Freeman plays the Speaker of the House. Freeman is strong and well casted as a politician. Wish he really was a politician because he has a firm, yet calm demeanor. This movie is recommended, because it does what it sets out to do -- be entertaining -- just don't think too hard about the story detals.