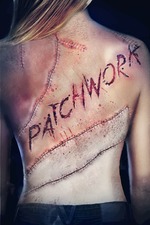 An opening scene with a morgue attendant (?) talking to a severed head only to have his co-worker wonder what's he doing so matter of factly.

Other than James Bond movies it's rare for me to comment on cool title sequences, but this one is excellent. Red line amputations, severing body parts to highlight names behind the film. Creative.

Is this actress who played the female villain Ursa in Superman II? I looked it up on IMDB because that should be impossible (30+ years have passed!). Nope, it's Maria Blasucci who just looks a lot like Sara Douglas did as Ursa in this movie. It's a short lived thing, as she is decapitated in short order.

From that point it's wake up to these Frankenstein-like sewed together trio of women, hence the title. Jennifer, Ellie and Madeleine (Blasucci) wake up sewn grotesquely together as one person and try and solve the mystery as to how they become this wicked patchwork.

Without spoilers, there is one funny line by the Dr. Frankenstein character toward the end that bears repeating (and not because it will make any sense here, it's just hilarious):

Sure, it's illogical and stupid in some places, but it's also inventive in parts, which I really liked. When you've seen as much horror as I have, you like it when the creative people get, well, creative.

If you are wondering what kind of movies the Shudder horror streaming service offers for variety, this movie is a perfect example. It's not scary, so if you don't like horror-comedy, skip it, but it's a very good movie for those who enjoy black horror humor.