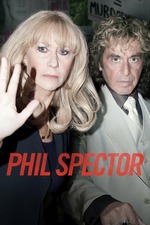 Phil Spector led an amazing life in the music business only to have it all come crashing down after Lana Clarkson died a suspicious death in his home when only he and her were in the room. He says she committed suicide, but prosecutor's charged him with murder. There is also the whole bizarre limo driver report that alleges Spector came out of the house with the gun in his hand saying, "I think I just killed somebody."

This biopic/drama follows the trial portion of Spector's life and only loosely goes into his great musical past. I wish it had spent more time with him and The Beatles and other amazing musical artists he shaped with his famous "Wall of Sound." Alas, it just makes it more like he's some eccentric relic -- and maybe he was at this time of his life -- walking around a museum of music memories.

There is no doubt Spector is portrayed as a weird guy and why he had this obsession with walking around with loaded guns is inexplicable at best. The defense attorney played by Helen Mirran is compassionate to Spector and represents his weirdness as best as she can. Al Pacino turns in yet another unhinged character portrayal as he is best at doing. His Phil Spector has a little bit of Scarface in him.

Despite the strengths of this HBO film, its weaknesses are the ending isn't as climactic as it should have been. I don't see this as a spoiler to say that it's like we are walked up to the edge ready to jump off and the screen goes black and the text tells us what happened next. I hate it when films do that. Finish the story dramatically, don't just make us read what happened next. Cop out. For that reason I took away a full star. It's entertaining and recommended, but feels unfinished.