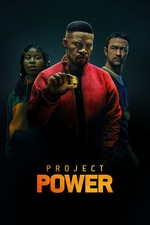 A new pill is on the market, a potent, dangerous drug that, when taken, can give the person 5 minutes of super powers -- or kill them. The police are trying to figure out how to deal with the drug which can literally turn one person into a killing army. The person who takes the pill doesn't know what power s/he will receive or if it will be an instant death sentence. Jamie Foxx plays a mysterious figure who knows more about the power than others -- and is on a mission to locate and disrupt the source.

This is a odd, yet somewhat compelling movie. It's not really a superhero film as I thought it might be from the previews. It's more taking it as a drug problem movie showing how the police -- and others wanting to thwart it -- would address and handle it like any other drug, only the drug presents very unique crime problems.

Jamie Foxx's performance is good, as is in most anything he stars in. The opening scene where he goes off on the 5-minute Human Torch is exciting. I'm not as sure about the rest of the story. My first watch left me a little confused in some parts. The motivation for creating the drug is but one area that should be driving the story forward, but it's mainly Jamie Foxx trying to run down the dealers to lead him to the source. Think I need to rewatch this to see what might have been missed. I was entertained, and definitely will recommend.

What I liked most on my first watch is that it didn't take the story in a direction I completely expected, which is always appreciated. Like being surprised.

It's not cliched, unless you have seen a bunch of drug crime movies, and then it has a very similar feel, sans the unique drug effects. I'm thinking it's a bit like Robocop 2, with the drug kingpan that Robocop had to do battle against, only instead of mechanized heavies, we get human on medicated roid rage.

Viewers can replace the superhero pill with PCP, meth, heroin, etc and you kind of have the same basic story framework. Guess I expected to see more people flying, dodging bullets, etc. Then again, you only get five minutes of power. That's not exactly enough to have a bunch of Superman-like characters running around wreaking havoc.