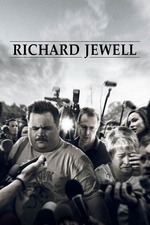 Directed by Clint Eastwood, this covers the 1996 Centenniel bombing with the security guard, Richard Jewell (Paul Walter Hauser) who is initially labeled a hero, but quickly becomes a suspect.

My wife and I both enjoyed this. Our only complaint was that there were some repetitive scenes and some side characters that didn't have full resolution, thus making the film not as tight as it could be. Recommended.