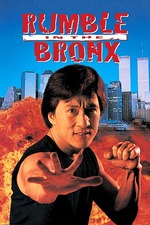 Rumble in the Bronx

Jackie Chan stars as Hong Kong police officer Ma Hon Keung who visits his grandfather who's getting married in the Bronx. His grandfather sells his store to a woman who is hassled by street thugs and Keung is hired to protect the store. He befriends a handicapped young boy and his mother that's mixed up with the thugs. Meanwhile, some diamonds get heisted by the thugs from a vicious crime lord named White Tiger. Soon, Jackie Chan is embroiled in martial arts action at every turn.

There are some clever martial arts stunts and pure Jackie Chan fight choreography. In the end credits we see that he actually suffered an injury while jumping onto a boat. This movie is one of my favorite Jackie Chan martial arts films. His work here is solid and the acting for a martial arts film especially is pretty good. Some funny, dramatic scenes include the woman who owns the shop. Action film fans definitely need to check this out. Recommended.